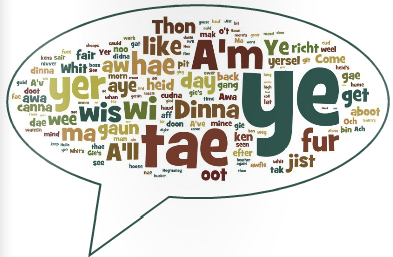 Grammar is the glue that holds any language together and is made up of the rules that make our speech and writing comprehensible to others.

Although native speakers of any language have an instinctive feel for these structures, learners usually need some formal guide. In the case of Scots, even fairly fluent native speakers are likely to be unaware of the language patterns they are using as they are almost never taught. It is only when the ‘rules’ are written down can speakers and learners appreciate how rich Scots grammar is and how much it differs from standard and colloquial English.

Scots is usually spoken and often written in some mixture with English. Knowledge of grammar helps speakers and writers distinguish between the Scots and English components. In such mixtures ‘good’ Scots is commonly misidentified as ‘bad’ English, so it is important especially for teachers and writers to be able to tell the difference between the two.

Of course a common root and many centuries of close contact between Scots and English have ensured that the grammars of the two tongues are broadly similar.  So what does ‘good’ Scots actually mean? Grammar forms evolve but are not random inventions. The ‘good’ forms usually derive directly from traditional printed Scots usage and have proved to be remarkably consistent over both time and geography.

Spoken and literary Scots grammar has actually been documented in detail for almost a century but care still has to be taken, as there are many traps for the unwary. Despite an increasing number of publications, the grammar of Scots, like its orthography and vocabulary can still be considered as being somewhat fluid. Inevitably authors – including myself with a Central Scots background – are strongly influenced by local dialectical variations, so there are inconsistencies between the various accounts.

Grammar links Scots with its historic pedigree but also ties the various dialects of Scots together. Pronunciations and even vocabulary may vary from Shetland to Ulster but as Christine Robertson rightly notes in her 2012 grammar for children “We hae mair things in common than we hae keepin us apart. Ane o they things is grammar”.

Given the status of Scots as a primarily spoken tongue, many researchers report a loss of distinct grammatical forms due to convergence with English, but what is really astonishing is how much remains.

If you are interested in finding more about the Scots Learners Grammar, a guide designed for teachers and writers of Scots,  you can download it from one of the links on the left.

[Adapted from the introduction to the Scots Learners’ Grammar]