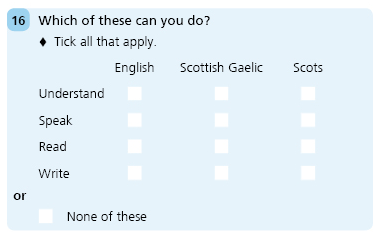 As we have seen, the consequences of the NRS cleansing the News release of the astonishing data of Scots was profound, hiding Scots (again) from public debate. So, was this action at all justified?

The first thing to do is agree with NRS that Scots remains a contested linguistic entity; it means different things to different people. Is that contestation reason enough to continue to suppress it (as NRS seem to imply), or is that contestation a consequence of its continued suppression? The Census data was a once-in-a-generation opportunity to open the debate, to propel the discussion of Scots into the public arena. But NRS decided unilaterally that it was not to be. Let’s examine their reasoning then in more detail, and pick up the counter argument by the Scots Language Centre, published the same day (SLC Analysis of Census 2011 for Scots).

In the Release 2A Statistical Bulletin – PDF the NRS wrote “The census data on language skills in Scots needs to be carefully qualified. The question on language skills in the census questionnaire was relatively poorly answered. For example, a significant number of respondents provided information on their skills in Scots but did not indicate any corresponding abilities in relation to English, perhaps suggesting they considered Scots and English as inter-changeable in this context.” This seems to refer to the problematic inconsistency between answers to Question 16 “Which of these can you do? [language skills]” and  Question 18 “Do you use a language other than English at home?” – respondents had to write in an answer. (Question 17 was “How well can you speak English?”). The original questions are here. There were 1,537,626 speakers recorded for Question 18 but only 55,817 wrote ‘Scots’ for Question 18. So did the respondents to this question actually consider ” Scots and English as inter-changeable”.

As SLC point out there is quite a plausible alternative explanation “The question immediately predisposes people in their mind to think in terms of the English language on one hand, and perhaps a foreign (non-Scottish) language on the other“. The choices ware English only, Sign Language and other (remember they had to write in an alternative) so ” it is quite understandable if many people simply assumed the difference being asked was between knowing and using English (and therefore excluding a foreign choice) and a foreign language. After all, they had already been asked about Scots, and may have assumed this was only about English“. The immediately previous question 17 was of course “How well can you speak English?”.

The second argument the NRS make is that “research carried out prior to the census also suggests that people vary considerably in their interpretation of what is meant by “Scots” as a language, resulting in the potential for inconsistencies in the data collected“. The SLC provided a forcefully brief response “This claim reveals that because the NRS is itself unfamiliar with the language it makes the assumption that speakers must also be unfamiliar with it and don’t understand. We cannot see that this is based on any scientific rationale and, in fact, linguistic prejudices are being allowed to cloud the interpretation of data that could not be more consistent and clear“. Remember the in preparation for the census, the SLC participated in what they considered a successful  informational and promotional campaign to raise awareness of what Scots is.

Personally I think there is an ambiguity about how people perceive Scots, but that is no reason to suppress interesting data. However it is the last strand of SLC’s argument that is by far the most convincing. Two surveys, fifteen years apart and using very different collection methods found almost exactly the same data and distribution. The fact these two data sets triangulate against the general distribution most Scots specialists would expect, only reinforces the bizarreness of the idea that the Census data is in any way bizarre.

The earlier survey was by the General Register Office for Scotland (GROS), the body from which the National Records of Scotland was partly created. In 1996 the GROS conducted a Cognitive Survey of Scots, touring the country, together with a panel of advisors, interviewing groups around the country. The survey was discussed in an earlier post Who speaks Scots? The 1996 survey revisited. The GROS concluded in its report that an estimated 1.5 million people spoke Scots. The 2011 figure is, remember, 1,541,693. The correspondence between the two data sets is truly remarkable!

I think therefore we can say with quite a lot of confidence that 1.5 million people self-identify with the Scots language. What their interpretation of Scots is is another question but to imply all these people are just a bit confused, as the NRS effectively does, is simply inexcusable.