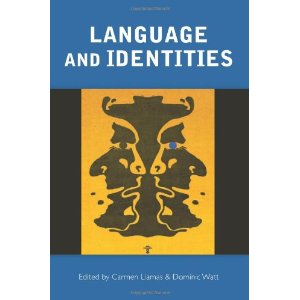 As we know much of the current debate around Scottish politics, culture and history revolves around questions of identity. Identity seems to underpin much of the discussion about the Scots language, too. What does it mean to be a Scots speaker? Why have the middle classes generally disowned it? How does ‘Scots’ relate to Doric, Glesca, Ullans and the other dialects? etc.

What is the link then between the language or variety we speak and our identity? In recent years a whole research area has emerged in linguistics around this topic and looking for some insight I turned to the introductory section of the recent academic tome “Language and Identities” edited by Carmen Llamas and Dominic Watt, and published in 2010 by the Edinburgh University Press.

Modern theories of identity suggest ‘Scottishness’ is not ‘essential’ – i.e. not something we have – but constructed on the fly through performing various acts which are associated with the Scottish community i.e. it is something we do. Wearing kilts at weddings, supporting the Scotland football team, speaking with a Scottish accent etc are all  indicators of Scottishness. The context of activity in the community that identity ’emerges’: “it is in interaction that all these resources gain social meaning” (p19).

Language is of course central to identity;”people’s choice of languages, and ways of speaking, do not simply reflect who they are, but make them who they are…our very sense of who we are, where we belong to and why, and how we relate to those around us, all have language at their centre.. they signal social belonging ” (p.9)

A lifetime of aural socialisation makes us very acute to the linguistic indicators of group affiliation. Hearing a syllable to two enables us to interpret (rightly or wrongly) one another’s background. We can therefore use aspects of language (accents, dialects and languages) as a cultural tool to position ourselves, for example to show solidarity, separation or social superiority with respect to the other speaker. For example we may try to dominate the other speaker by talking ‘correct’ English which conveys authority/education/status or we may attempt to adjust our tone to that of the other speaker as “it is easier to make a request from someone socially closer than someone socially distant” (p.30). This is what is meant by ‘constructing’ an identity through language.

What accent, words and so on actually do is refer to (in linguistic jargon ‘indexes’) a shared or social meaning external to the language itself. A Scottish ‘pan loaf’ accent is meaningless in itself but to a native speaker may indicate a social or value position, or even a personality-type. This is not merely arbitrary and judgemental; the speaker may actively be using the accent to propose his or her assumed social position. Moreover TV and drama often reinforce the link between accent and character as acting often relies on such off-the-peg stereotypes. Through this conscious and constructed association accents, dialects and so on accumulate a network of connected beliefs and attitudes.

Dialects and languages also have a broader social function to form communities “they are still what bind together communities, from the family to the nation…they carry our personal and community stories” and “in transmitting the memory of who is not part of us, they transmit the meaning of who we are” (both p 10). These group identities thus “define and regulate the role of the individual within the social unit” so although abstract are also, according to Pierre Bourdeau also ‘real’. Membership of groups (especially in-groups and out-groups) form a part of an individual’s concept of herself and therefore have real emotional power. Benedict Anderson‘s idea of the nation as an ‘imagined community‘ is an extension of this idea – what binds a nation together is the shared belief of common membership. The same must apply to a speech community.

Continued membership of a community depends on sharing beliefs and norms (including linguistic ones). According to Marxist historian Eric Hobsbawm linguistic nationalism – the promotion and development of national languages – was historically associated with the lower middle classes (teachers, shopkeepers, clerks and the like). These were the ‘norm setters’ who used language to self-identify and demonstrate (by performance) their ‘respectability’ (see Nations and Nationalism since 1780, p 112). In Scotland’s case of course by the late 19th century this class was predominantly English speaking, or at least Scots-English bilingual, so that the ‘norms’ they would promote though education, politics (of the left as much as the right) and commerce would be ‘correct(ed)’ English. Scots would remain identified with inarticulacy and the voiceless ‘lower classes’.