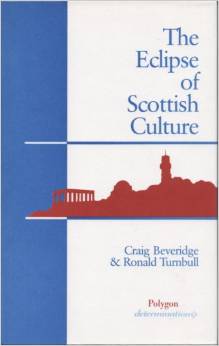 I hadn’t read Craig Beveridge and Ronald Turnbull’s book since it first came out in 1989. It is still an incendiary read and I’m not surprised the Scottish intelligencia reacted none too well to its polemic.

The authors built on Frantz Fanon’s notion of “inferiorisation” to describe the “cultural oppression” of Scotland. Applying such notions to attack the Scottish intellectual and academic elites was provocative, to say the least.  Fanon wrote extensively about the psycho-cultural effects of colonisation on the Third World. He argued that the culture of colonized peoples is usually belittled as barbaric, primitive and uncivilized, presumably to justify morally the process of colonisation itself. However the ‘natives’ then begin to internalise the message, accepting – or being forced to accept – that local customs and cultures are inferior to that of their metropolitan colonisers. Continual disparagement damages confidence and self-respect, and so undermines resistance to foreign rule. The mantra is reinforced by local évolués, natives that eagerly identify with the  ‘superior’ culture, maybe embarrassed by their self-perceived ‘backwardness’.

From this Beveridge and Turnbull developed the notion of ‘inferiorist discourse’, as a set of binary oppositions contrasting Scotland negatively (e.g. violent, parochial, primitive) against England (decent, cosmopolitan, sophisticated).  The obvious opposition Scotland (Scots-speaking) vs England (English-speaking) is not listed, but fits perfectly into their inferiorist framework. They highlight however the often-repeated ‘theory of Scottish inarticulacy’, quoting James Young who criticises “the enthusiasm of the Scottish elite in aping their superiors” especially their adoption of the English language, leaving the working and rural classes to struggle with what was effectively a foreign tongue.

Although the authors raise the “linguistic-literary consequences of the Union”, language is not really their focus. In the book they initially apply the inferiorist discourse model to mainstream accounts of Scottish history that invariably described pre-Union Scotland as primitive, unruly and violent, and more specifically to agrarian history, similarly portrayed as backward.  They analyse the work of Tom Nairn and his thoughts on Kailyardism (a subject and figure I will no doubt return to in a later post) then expand their rigorous critique to what they perceive as the Anglicisation of Scottish education.

In 2015 is hard to read their account of  Scotland’s “loss of self-belief and acceptance of the superiority of metropolitan mores” without thinking of the discourse around the Referendum, much of which was deliberately framed in those terms. Thus although Beveridge and Turnbull were criticised in the 90s for having the impertinence to apply a postcolonial model to Scotland, in the cultural and political sense the Referendum debate seems to have vindicated their stance. Again I will return to postcolonial narratives surrounding Scots in a later post.

Beveridge and Turnbull also offer a clear structure to consider the reasons and consequences of the Scots language being abandoned by the Scottish elites. Whether you buy into the postcolonial discourse or not it seems hard to disagree  that in a linguistic sense at least “in replicating and enlarging the metropolitan images of native retardation, the Scottish intelligencia has fulfilled the same historic function as the colonial évolués whose sad condition was analysed by Frantz Fanon”.

How much does the class and cultural divide separating the English-speaking intelligencia from the Scots-speaking working and rural classes continue, in Beveridge and Turnbulls’ words to “underwrite Scotland’s subordination”?