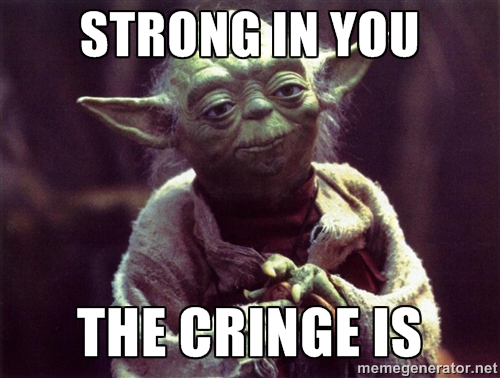 In monie the creenge is yet strang; “what an absolute embarrassment”, “unbelievably cringey”, “what a joke”, “WotDaHell is wrong with you cretins”.

Aften a heich-heidit tone wis adoptit; “That is not a language that is the corruption of language by ignoramuses”, “I genuinely thought this was a spoof”, “the nonsense purporting to be the Scots language”, “The phenomenon of Scottish people pretending this is ‘Scots’ is so odd“, “Stop trying to legitimise slang“, “There’s Scots slang and then there’s this!!!!”. Jings, that’s pit oor gas on a peep.

A fyow wis richt pit oot; “spoiled the only paper I read… No paper tomorrow then – no such language” an monie wis in a kinna denial; “I’m NO cringing and Scots us NO a language I’ve never even met anybody who speaks Scots”, “Nobody in Scotland talks like that. Not a single soul. Embarrassing”,”Only slang and that’s hard on the ears”. Ae puir cheil e’en said he wis a bittie illiterate; “a monumental pain in the arse to read”.

The airmie o croose pseudo-linguists wisna pit aff at aw by the thickness o their mince; “a reminder that what people call “Scots” these days is (mostly) a dialect, not a language” said aw-roon expert Alex Massie. Aw wis made clair in a later tweet; “No. Scots can be a language; the Scots most people think of as Scots is not a language”. Got it? Anither sel-styled bawheid, “It’s perfectly comprehensible to any English speaker. This still falls within dialect boundaries”. Accordin tae kenspeckle ken-it-aw Stephen Daisley, “It’s slang, people.”

Mair nor a fyow conseedered they haed a deep unnerstaunin o Modren Scots; “This looks more like a mish mash of local dialects”, “Hybrid and inconsistent, mixing together various regional forms and English borrowings“, “They confuse Scots with bad English. Their Tweet referring to “the morrow’s” paper was toe-curling“, “Actually using the expressions stairheid rammy or get their jotters isn’t really Scots, it’s just novelty, if anything it mocks the language”.

Och aye, an we shud tak heed o the wice-lkile voices o rizzon; “Dialects are hard for others to understand, Scotland needs to look outward”, “If Scots want to do business overseas, we need to speak standard English” an the guid yin, “People who think Scots is a language: tell a job interviewer you’re bilingual. Then tell me about the amazing job you didn’t get”. Ooya!