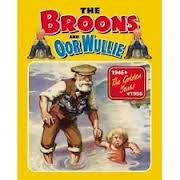 “The Broons” and “Oor Wullie” remain significant icons of Scottish popular culture, stretching back some 70 years. The most distinctive feature of both comic strips, still published weekly in the The Sunday Post newspaper is the use of Scottish vernacular language. The one-page comic strips were created by Dudley D. Watkins, who continued to draw and write them until his death in 1969. Watkins’ visual and linguistic style has been faithfully replicated by the publisher since then.

According to Brightwell (2006) the language was closely aligned with publisher D. C. Thomson’s overall editorial policy of ‘realism’, intended to attract the large Scottish urban audience. This was remarkably successful. Brightwell continues, “Both strips, written in broad Scots dialect, were hits; the Scottish public rapidly took them to their hearts, and there is little doubt that they played a major part in the paper’s phenomenal success. In 1971, shortly after Watkins’ death, the Sunday Post had an estimated readership of just under three million, a staggering 79 per cent of the adult population of Scotland”.

This saturation market penetration has a unique socio-cultural aspect. For most Scots, these strips were and remain the only mainstream and regularly available written representation of their spoken language. Given that there was a deliberate focus on authenticity we can assume the dialogue, although wholly fictional, is at least to some extent representative of the way people speak or spoke.

Given that this copious resource (of nearly a million words per strip) stretches back over some 70 years, it is surprising there has been so little interest in it from linguists. In one of the few academic studies of these texts, German linguist Anne Hoyer investigated the process of lexical change in “Oor Wullie” (Schwartz, 2007). She acknowledges the “Scotticisms” in the cartoons function as instruments of national identification but through computer based corpus analysis that the vernacular elements had been eroding over the years to be replaced by Standard English. A ‘corpus’ is a large collection of digital texts, often transcribed from printed or spoken material.

As part of an Open University assignment in 2008 I investigated Hoyer’s claim with respect to The Broons. I created a 8,000 word corpus of texts in “The Broons” spanning two periods of approximately 60 years apart: late 1940’s (represented in a selections of reprints) and 2007 (from that year’s Broons annual). I then did a frequency analysis to undertaken to identify patterns of distribution of vernacular forms when compared with standard English conversational texts (as represented by an OU corpus). I also wanted to find out whether some of the methodologies of corpus analysis could shed light on the sociolinguistic aspects functions of “The Broons” as socially positioned texts.

Why has this remarkable resource been so ignored? It was suggested above that right-wing publisher D.C.Thomson deliberately positioned the comic to appeal to a certain audience. It is still widely thought among Scottish metropolitan intellectuals that “The Sunday Post” itself represents a particularly conservative and sentimentalised vision of Scottish life. Scottish historian and intellectual Tom Nairn’s harsh 1960’s quip that Scotland would only be tolerable when “the last Kirk minister has been strangled with the last copy of the Sunday Post” is for many still a potent trope. Even some Scots language enthusiasts view the Scots of the Broons with distain.

However, given the unusually onerous linguistic role “The Broons” and “Oor Wullie” comics have (as virtually unique written representations of vernacular culture), the “Scottishness” of the texts is an issue that corpus analysis may illuminate, again as Hoyer suggests. The problem is that the Scottish ‘vernacular’ is notoriously hard to pin down as it functions neither as a language nor a dialect. (See Style-shifting and codeswitching in Scots – what is it and why does it matter?).

The concluding aspect of my study was more challenging, and went beyond what Hoyer was attempting in her PhD. The hypothesis was that the role of vernacular forms in the ‘affective’ domain (informal,emotionally rich discourse) may be the main social reason for their survival. If corpus analysis revealed that vernacular lexis and grammar were ‘doing the communicative work’ in these affective areas, we have the basis for both a quantitative and qualitative analysis to predict where vernacular will tend to persist in the ‘cline’ identified by several Scots linguistic studies.

An interesting question is the authenticity of the data itself (transcribed from the speech bubbles of the strips). Should the texts be regarded as works of fiction or as representative of genuine spoken dialogue? Clearly the partial focus of this study on sociolinguistic aspects would demand that the dialogues is to some extent ‘authentic’ and representing realistic linguistic and not purely invented as an artificial language by Dudley Watkins and later authors.

There is no easy answer to this. There are a number of arguments and counter-arguments. It seems reasonable to assume that Watkins attempted to mimic the speech patterns of urban Scots, and that the sheer popularity of his creations would indicate some identification on the part of the readership with the language, and therefore some degree of linguistic validation. On the other hand, The Broons is an artistic, possibly over-sentimental, creation and the language is deliberately part of that ethos. The use of characteristic ‘bowdlerised’ expletives such as “Jings!”, “Crivvens!” and “Michty Me!” are sometimes taken as indicators of the inauthenticy of the language. The reverse could equally be true – these terms were not invented (and are clearly based on various blasphemies) and in fact were the only way Watkins could indicate the robustness of the vernacular language.

The texts may also be inauthentic in another sense; Watkins may have had to compromise ‘Scottishness’ for readability. Thus for example although the final ‘g’ is dropped in words like gettin’, seein’ etc, the equally common written Scots conventions of dropping the final ‘d’ and replacing ou with oo (e.g. soon’ for sound) are avoided.

Nonetheless in the absence of genuine corpora (transcriptions) of spoken Scots there is an academic tradition for using fictional dialogue in Scottish literature as the basis of linguistic analysis, of which Hagen’s (2002) review of urban Scots dialect writing is a good example.