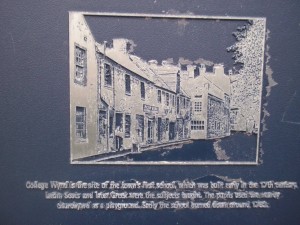 Fae Stuart Paterson‎ on FB “Fun this wee plaque when back in Killie the ither week, in the auld toon centre by the Laigh Kirk. Aiblins ye cannae zoom in tae jalouse it sae Ah’ll quote the wurds:

“College Wynd is the site of the town’s first school, which was built early in the 17th century. Latin, Scots and later Greek were the subjects taught. The pupils used the nearby churchyard as a playground. Sadly the school burned down around 1752.”

Caroline Macafee thocht thon’ll be fae the time whan ‘Scots’ an ‘English’ wis yaised interchangeably. “Hoo ye apply the wirds fae the pynt o view of a modren defineetion is a separate maitter fae hoo the wirds wis yaised in the past. Keith Williamson in *Scottish Language* 1 (1982) haes examples o Scots an English bein yaised interchyngeably at a surprisinly late date, maybes even intae the 19th c” She quotit “As late as 1719 the two terms were still being used indiscriminately even in reference to the same school in the same portion of record“.