Something went wrong in the editing process for a version of the SG’s Scots language web page. Fair enough, but what happened next is bizarre.

A SCOTTISH Government web page set up to celebrate the Scots language had to be edited after experts branded some of the words gobbledygook . The site quoted baffling expressions like “wirhameowerdaeinsan” in a bid to encourage more people to embrace the historical dialect, still used by 1.5 million people today.

Apparently this was enough to get some Scots-deniers in a frenzy, at least according to this piece by Graham Grant, the Home Affairs Editor of the Scottish Daily Mail, today. Mr Grant’s linguistic knowledge is apparently limited to Stanley Baxter’s Parliamo Glasgow comedy sketches dating from the 1960s. 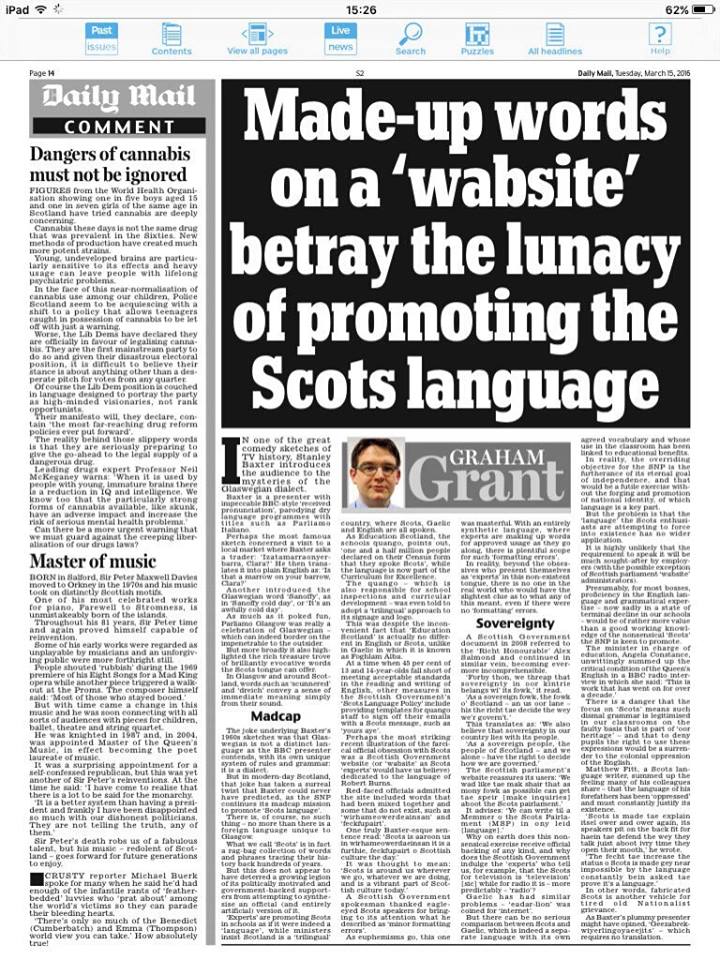 Here’s the text in all its glory.

IN one of the great comedy sketches of TV history, Stanley Baxter introduces the audience to the mysteries of t he Glaswegian dialect. Baxter is a presenter with impeccable BBC-style ‘received pronunciation’, parodying dry language programmes with titles s uch as Parli amo Italiano.

Perhaps the most famous sketch concerned a visit to a local market where Baxter asks a trader: ‘Izatamarraonyerbarra, Clara?’ He then translates it into plain English as: ‘Is that a marrow on your barrow, Clara?’

Another i ntroduced t he Glaswegian word ‘Sanoffy’, as in ‘Sanoffy cold day’, or ‘It’s an awfully cold day’.

As much as it poked fun, Parliamo Glasgow was really a celebration of Glaswegian – which can indeed border on the impenetrable to the outsider.

But more broadly it also highlighted the rich treasure trove of brilliantly evocative words the Scots tongue can offer.

In Glasgow and around Scotland, words such as ‘scunnered’ and ‘dreich’ convey a sense of immediate meaning simply from their sound.

The joke underlying Baxter’s 1960s sketches was that Glaswegian is not a distinct language as the BBC presenter contends, with its own unique system of rules and grammar: it is a dialect.

But in modern-day Scotland, that joke has taken a surreal twist that Baxter could never have predicted, as the SNP continues its madcap mission to promote ‘Scots language’.

There is, of course, no such thing – no more than there is a foreign language unique to Glasgow.

What we call ‘Scots’ is in fact a rag-bag collection of words and phrases tracing their history back hundreds of years.

But this does not appear to have deterred a growing legion of its politically motivated and government-backed supporters from attempting to synthesise an official (and entirely artificial) version of it.

‘Experts’ are promoting Scots in schools as if it were indeed a ‘ l anguage’, while ministers insist Scotland is a ‘trilingual’ country, where Scots, Gaelic and English are all spoken.

As Education Scotland, the schools quango, points out, ‘one and a half million people declared on their Census form that they spoke Scots’, while the language is now part of the Curriculum for Excellence.

The quango – which is also responsible for school i nspections and curricular development – was even told to adopt a ‘trilingual’ approach to its signage and logo.

This was despite the inconvenient fact that ‘ Education Scotland’ is actually no different in English or Scots, unlike in Gaelic in which it is known as Foghlam Alba.

At a time when 45 per cent of 13 and 14-year-olds fall short of meeting acceptable standards in the reading and writing of English, other measures in the Scottish Government’s ‘Scots Language Policy’ include providing templates for quango staff to sign off their emails with a Scots message, such as ‘yours aye’.

Perhaps the most striking recent illustration of the farcical official obsession with Scots was a Scottish Government website (or ‘wabsite’ as Scots ‘experts’ would have us believe) dedicated to the language of Robert Burns.

Red-faced officials admitted the site included words that had been mixed together and some that do not exist, such as ‘wirhameowerdeainsan’ and ‘feckfupairt’.

It was thought to mean: ‘Scots is around us wherever we go, whatever we are doing, and is a vibrant part of Scottish culture today.’

A Scottish Government spokesman thanked eagleeyed Scots speakers for bringing to its attention what he described as ‘minor formatting errors’.

As euphemisms go, this one was masterful. With an entirely synthetic l anguage, where experts are making up words for approved usage as they go along, there is plentiful scope for such ‘formatting errors’.

In reality, beyond the obsessives who present themselves as ‘experts’ in this non-existent tongue, there is no one in the real world who would have the slightest clue as to what any of this meant, even if there were no ‘formatting’ errors.

A Scottish Government document in 2008 referred to the ‘ Richt Honourable’ Alex Salmond and continued in similar vein, becoming evermore incomprehensible.

‘Forby thon, we threap that sovereignty i n oor kintrie belangs wi’ its fowk,’ it read.

‘As a sovereign fowk, the fowk o’ Scotland – an us oor lane – his the richt tae decide the wey we’r govern’t.’

This translates as: ‘ We also believe that sovereignty in our country lies with its people.

‘As a sovereign people, the people of Scotland – and we alone – have the right to decide how we are governed.’

The Scottish parliament’s website reassures its users: ‘We wad like tae mak shair that as mony fowk as possible can get tae speir [ make i nquiries] aboot the Scots pairlament.’

It advises: ‘Ye can write til a Memmer o the Scots Pairlament ( MSP) i n ony l ei d [language].’

Why on earth does this nonsensical exercise receive official backing of any kind, and why does the Scottish Government indulge the ‘ experts’ who tell us, for example, that the Scots for television is ‘televeision’ [sic] while for radio it is – more predictably – ‘radio’?

Gaelic has had s i milar problems – ‘eadar-lion’ was coined for ‘internet’.

But there can be no serious comparison between Scots and Gaelic, which is indeed a separate language with its own agreed vocabulary and whose use in the classroom has been linked to educational benefits.

In reality, the overriding objective for the SNP is the furtherance of its eternal goal of i ndependence, and that would be a futile exercise without the forging and promotion of national identity, of which language is a key part.

But the problem is that the ‘language’ the Scots enthusiasts are attempting to force into existence has no wider application.

It is highly unlikely that the requirement to speak it will be much sought-after by employers (with the possible exception of Scottish parliament ‘wabsite’ administrators).

Presumably, for most bosses, proficiency in the English language and grammatical expertise – now sadly in a state of terminal decline in our schools – would be of rather more value than a good working knowledge of the nonsensical ‘Scots’ the SNP is keen to promote.

The minister in charge of education, Angela Constance, unwittingly summed up the critical condition of the Queen’s English in a BBC radio interview in which she said: ‘This is work that has went on for over a decade.’

There is a danger that the focus on ‘ Scots’ means such dismal grammar is legitimised i n our classrooms on the faulty basis that is part of ‘oor heritage’ – and that to deny pupils the right to use these expressions would be a surrender to the colonial oppression of the English.

Matthew Fitt, a Scots language writer, summed up the feeling many of his colleagues share – that the language of his forefathers has been ‘oppressed’ and must constantly justify its existence.

‘Scots is made tae explain itsel ower and ower again, its speakers pit on the back fit for haein tae defend the wey they talk juist aboot ivry time they open their mooth,’ he wrote.

‘The fecht tae increase the status o Scots is made gey near impossible by the language constantly bein asked tae prove it’s a language.’

In other words, fabricated Scots is another vehicle for tired old Nationalist grievance.

As Baxter’s plummy presenter might have opined, ‘Geezabrek-wiyerlingoyaeejits’ – which requires no translation.