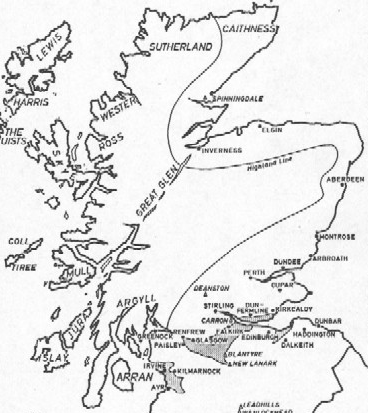 Conventional accounts of Scots emphasise the linguistic divide of the Highland Line; Gaelic-speakers above, Scots-speakers below. This probably hasn’t been accurate for centuries due to population movement and language change. The 2011 Census figures provide evidence.

Although the majority of Gaelic speakers (51.5%) still live in what is sometimes regarded as the “Gàidhealtachd” council areas (Argyll & Bute, Eilean Siar, Highland), almost half don’t. Although numbers are tiny, this distribution clearly supports the notion of Gaelic as a Scotland-wide language and that Gaels should be supported at least to some extent in the Lowlands.

My aim is not to challenge efforts to promote the Gaelic language in the Gàidhealtachd or elsewhere, rather it emphasises the Scotland-wide distribution of the language. But Scots is also a Scotland-wide language and if it is to be promoted, this has to apply to the whole of Scotland, not just the traditional heartlands.