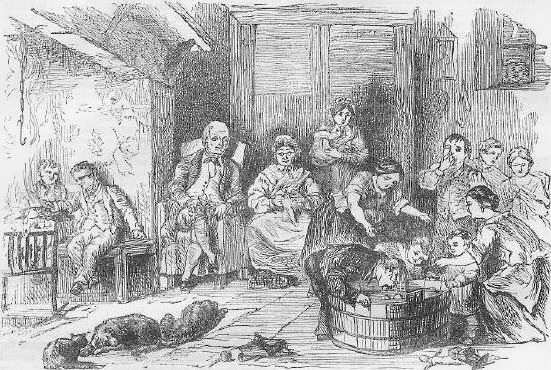 An old paper but interesting in that it links to my previous posts on the analysis of The Broons and reveals some of the deep roots of anti-Scots prejudice and the middle class attitude that prevailed when I was learning the language in the late 1960s.

Murison starts with the familiar story of Scotland’s loss of status in the 18th century when “it gradually became a mark of social prestige to speak English with an authentic accent and Scots was more and more restricted to the context of the domestic, the familiar, the sentimental, the comic – in fact to the ambit of folk-life“.

This is what Murison calls ‘folk-speech‘ and he characterises it in quite specific terms i.e. “the fondness for the sententious utterance, the epitomising of common experience in a short, vivid or pithy staement, which in content may be nothing more than a truism or platitude, passing for folk wisdom“. The oddly patronising tone continues;”folk-speech will be coloured by emotion, animation, emphasis, the desire for dramatic or picturesque effect“. We then drift into broad judgements of the speakers themselves, “another feature of folk-speech is the frequency of contemptuous or perjorative words…for anyone who differs in any way from an accepted norm” and this can be linked to “a kind of primitive tribalism, the feeling of belonging to a closed community which produces suspicion or dislike of the stranger or of anyone not conforming to the norm“.

Maybe it was OK to haiver like this 50 years ago, and perhaps times have moved on but it is interesting how judgements on Scots slipped so easily into judgements on the speakers’ “primitive tribalism“.

I think this type of language, in an academic paper no less, goes to the heart of why the Scottish middle classes rejected Scots in such a remarkable way. While appreciating the richness and history of Scots as a ‘cultural resource’ the educated classes detested the actual people and communities that spoke it. Murison observes correctly at one point that “popular speech gives names to what is of significance to the people“, but the impression is clearly given that their ‘significance’ in his eyes is pretty insignificant.

However it certainly is true that the Broons comic strips were full of exactly this kind of language. There is of course a long tradition of dismissing this type of familiar linguistic use as ‘trivial’ – it is unfair to pick on Muirson who was writing in the context of his time – but in fact from a linguistic standpoint this is where this is where most of the conversational work gets done. What is of significance to speakers, if not to intellectuals, is everyday interaction and this is where Scots has survived.

If you ignore the old fashioned – albeit still prevalent – attitudes, though, the article is full of interesting thoughts on Scots vocabulary. I leke the idea of Scots having “100 different words for the earwig” and all the terms for traditions such as ‘first fit’, ‘hansel’ and older ones like ‘heidwashin’ (no about nits, but a good-luck ritual). he goes into the roots of many words too; ‘bools’, ‘gowf, ‘peevers’, ‘carline’, ‘bejan(t)’ etc.

Murison ends on a down beat tone, though, he says all this variety needs to be recorded in dictionaries as soon as possible before everything is lost as  “whatever the speech of this country at the beginning of the next century, it is very doubtful it will be anything that is recognizably Scottish, at least in the ordinary historical meaning of that term“.

Whether Murison’s gloomy prediction has actually come to pass is a matter of opinion, but he perhaps inadvertently points to some of the attitudes of our own scholars that have contributed to that very change.