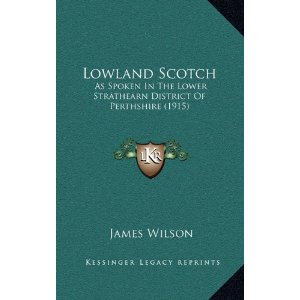 The final step in my odd journey back to Scots took place in a university library in Manchester. I was working down there, perhaps unconsciously following a trajectory started by my parents a generation before. Before the days of the web and Facebook  people actually used to communicate with text-based bulletin boards groups and I was a member of one called soc.culture.scottish. It was about Scottish politics, and occasionally the threads (lines of discussion) got a bit heated. One such thread asked if Scots was a dialect or a language. It seemed obvious to me that it was a language, but as the discussion progressed over several days I realised that although I was taking a stance I did not really know much about Scots other than it was something I had spoken at least to some extent as a child.

I was working in one of the universities so naturally (Google had not been invented) I trotted off to the library. And there in a dark forgotten shelf I found two dusty tattered books that I can reasonably say changed my life. They had been published in 1915 and 1921, and according to the paper record tabs that were a feature of library books at the time, neither had been taken out of the library since the mid-50s. I opened them up, one after the other and peered in the yellow pages. It was like finding a long lost treasure. The 1921 one was called “A manual of modern Scots” and over nearly 500 pages explained in great detail the grammar of the Scots I had spoken as a child. The examples were drawn from Scots literature from the late seventeenth to the late nineteenth centuries. The authors, William Grant and James Main Dixon had painstakingly gone through published Scots narratives and Scots dialogue in otherwise English texts and constructed a grammar from it. The astonishing thing was the structures they described were exactly the structures we used in the 60s and 70s, we bairns were not just making stuff up, we were using common vocabulary and grammar structures stretching back at least 250 years. A secret language.

Heady stuff, but the best was yet to come. The 1915 book was called “Lowland Scotch” and was written by a religious man with a strikingly fundamentalist beard (there was a blurry picture in the front) called James Wilson. Wilson had written another grammar, but had taken a completely different approach from Grant and Dixon. He had actually done some field work in a village in the Strathern district and basically written down what people had said, using an charming and functional orthography of his own devising. Where had he carried out his studies? In Dunning, where I had gone to primary school. Reading through Wilson’s lists of words and phrases I could hear the voice of the older Dunning folk in my ears. Some of the terms he had carefully recorded had inevitably been lost in the intervening 60 years but this was undoubtedly the authentic sound of my childhood soundscape.

I crouched in the library and spent hours reading and re-reading over both volumes, still unable to believe what I was before my eyes. Both books, so different in approach were telling me the same story. And then I sat back and looked out of the window (something of a habit) at the darkening Manchester sky. Scots wasn’t a just a dialect, as I had long suspected anyway, but had a clear and consistent grammar which had been reasonably stable for generations. It had a very clear orthography, Grant and Dixon had just averaged out the varieties of literary spelling. It even had Wilson’s delightful phonetic system, still my favourite way of representing Scots, if such a thing was ever needed.

Yet all these things were hidden from the people who spoke it. Nobody brought these books into school when I was a child, nobody told us a grammar and wordlists even existed. Both books fell out of print and even nowadays many Scots language enthusiasts don’t seem to have heard of them.

The discovery of those books started me on a journey. I wrote one of the earliest Scots web sites (wabsteid, in Scots, a word I am pretty sure I coined), but went on to take a degree in English language just to study the history of language, sociolinguistics, advanced grammar, and even the analysis of discourse.