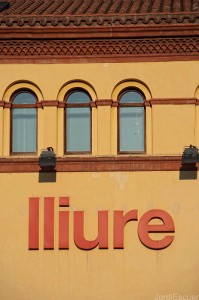 Knowing Scots had an indirect effect on me; I became fascinated almost obsessed by language, how people express themselves. I studied French and German in my spare time. I became fairly fluent in Spanish too and while learning that language in Aberdeen (of all places) met a lass from Barcelona, and whom I later married. Through her I picked up almost by accident another language, Catalan.

I didn’t know much about Catalan at first. At her family get-togethers her family aways spoke to me in Spanish, or Castilian as they preferred to name it. I began to realise though that as the boozy evening progressed I often lost the power to understand much what was being said. I thought it was the strong Catalan wine at first but it eventually dawned on me (I said I was a slow thinker, remember) that they had just forgotten I was not a local and had all switched seamlessly to their own tongue.

Catalan is a curious tongue. People say it halfway between Spanish and French but that is not really true. Half of the vocabulary, the longer words mostly, is almost identical to Spanish. A quarter seems pulled from the other Latin languages, French certainly, but just as much Italian and oddly enough maybe even a sprinkling of Portuguese. The last quarter (if you are still counting) is a range vocabulary and grammar fairly unique to itself. The challenge for learners is that it is the Catalan quarter that is the most spoken portion. That said intelligent Castilian speakers living in Catalunya claim to be able to understand it in a few weeks and learn to speak it competently in quite a short time. This closeness with Castilian has contributed to Catalan’s troubled history. Although a language with a long historic pedigree it was often condemned like Scots as an uncouth and unpleasant peasant dialect, and sometimes under the breath still is. Maybe that is why I developed an affection for Catalan’s thick vowels and frank phrases and for a while could ‘xarlar’ away reasonably well. At the time though, nearly 20 years ago, Catalan was a language rarely learned or spoken by foreigners. Sometimes I’d strike up a conversation with a random Catalan soul at a party or bar and they’d just stop and look at me in astonishment, as if a dog had just got up on his hind legs and started speaking. But I was getting used to it by then.

Something happened to Catalan though during my seemingly endless trips to Barcelona. After the death of Franco and the devolution of the Spanish state, once even more centralised than the British one, to the autonomous regions, Catalan had been picked up by the Generalitat, the Catalan government, as a cause celebre. Why? Two aspects of Catalan society very different from Scotland is that the language was always spoken by a substantial portion of the middle classes. Only in the North East of Scotland are there middle-class speakers of Scots like my administrator ladies in Aberdeen. This means with the partial exception of Doric there a no middle-class champions and therefore no push to get the status of the language lifted. Say what you like about the middle classes, they get things done if it is to their benefit.

Moreover Catalan was seen as the main carrier of Catalan identity. Catalonia shares a long land border with ‘Castilian’ Spain and although the Catalan culture is rich it is the language that defines it. So Catalan was something to be increasingly nurtured and developed through the 80s and above all taught in Schools. My then wife was of the last generation not to be taught wholly in Catalan. Her father, by the way, was not taught Catalan at all under the Franco regime and although could speak it elegantly was completely illiterate in his own tongue. When he gave us handwritten shopping lists and the like they were always in meticulous Castillian Spanish, the script of prestige.

So what was the effect of this enormous task of linguistic re-engineering? At some time I noticed the ‘default language’, the language shop assistants and waiters automatically use in Barcelona, began to switch to Catalan. I realised that by the late nineties you could, and many did, live completely in a Catalan bubble. Catalan TV, which was comparatively good, Catalan language newspapers, Catalan books and Catalan public services. Only cinema remained, and remains, the last bastion of Castilian purity.

Metropolitan intellectuals are generally dismissive such ‘nationalistic’ projects, but as an outsider I was drawn to the energy, the sheer ambition of trying to redefine the identity of a whole country. Language was not the only, and probably not the most important, element of change, but it was one of its primary visible and audible symbols. And language nationalism is a relatively  ‘soft nationalism’ anyway, inclusive in the sense if you care to learn the language you can usually join the club, even if it is in the talking dog category.

Inevitably Just as I had seen Catalonia through Scots eyes I slowly began to see Scots through a Catalan context. Catalan’s troubled relationship with Castilian became equated with Scots’ problems with English. But Scots was nothing like as well developed as Catalan, was it? There were no grammars, few useful dictionaries….