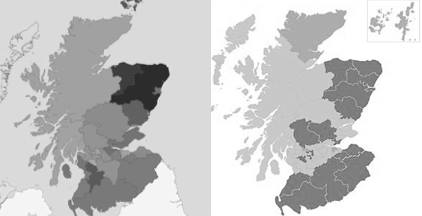 (A doot A wis bein tongue-in-chowk, by the wey.) Onieweys, got a bit o a blether gaun.

But the Tories are affa panloaf ?

Maybe the Tories will be influenced by their new partners in govt when it comes to their policy stance towards Scots, “The DUP is committed to establishing the Institute of Ulster-Scots to drive forward a positive research and educational agenda for this vital strand of Northern Ireland’s identity.”

It makes socio-linguistic sense that a community that has conserved its language and features of it that have changed less than in other dialects where people move around more will be conservative on political matters. Thus they might vote SNP in times when thats a vote to maintain the status quo of their cultural day to day concerns but not support them in changing the constitutional make up of the country they officially live in. Of course there will be exceptions but the general patterns isnt surprising.

I wid agree partially wi this. I’m an Aiberdeen toonzer bidin in Portsoy and though i share the Doric wi the locals I widnae stereotype them ah as implicitly conservative, but, certainly mony are reactionary, certainly leaning towards the racist and homophobic. There is an ethnocentrism tae the point that nae body wants tae go tae the next toon for a pint