This post expands a post from a few months ago where code switching and style-shifting were outlined. How do these mechanisms fit into a broader context of language and society? 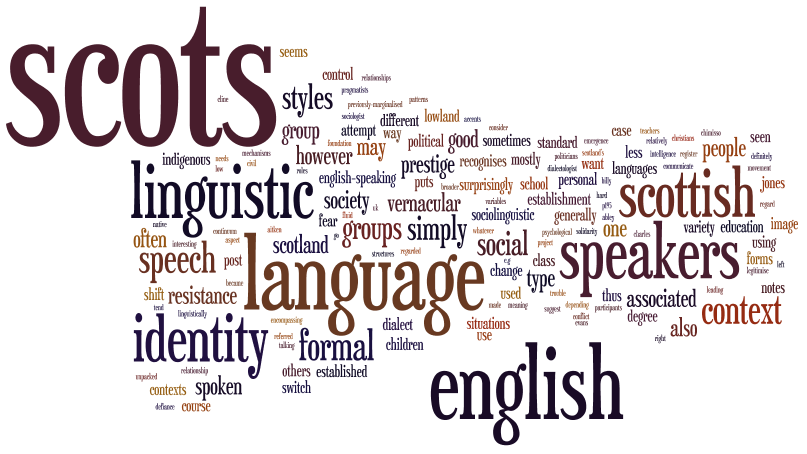 As Scottish linguist Tom McArthur notes in his 1998 book The English Languages, the linguistic status of the variety of English spoken in lowland Scotland is very much contested. Linguistic ‘separatists’ such as Billy Kay (1993) who promote ‘Scots’ as a distinct historic language are ranged against pragmatists (e.g. Charles Jones 2002) who argue that the original distinctiveness of Scots is so eroded that it is now merely a fading dialect. There is also a surprisingly numerous (and powerful) band of Scottish language conservatives who still consider any vernacular forms ‘bad English’. The Scottish Government’s 2009 audit of Scots language provision in Scotland (Evans, 2009) represents the ‘official’ consensus describing Scots as “one of Scotland’s three indigenous languages and is the second most widely spoken indigenous language in the UK. The General Register Office for Scotland estimated in 1996 that there were approximately 1.6 million speakers of Scots” (p 4).

Any description of Scots needs some sociolinguistic context. Speakers draw on their linguistic repertoire (Holmes, 1992 p21) to communicate shared social meaning in their linguistic community. Variation in speech pattern is thus used both to convey personal identity and to negotiate social relationships. Speakers may deliberately or unconsciously shift between different accents or varieties (referred to as ‘styles’) depending on context. One of the key sociolinguistic variables of context that influences this type of change is its degree of formality. Speakers use more ‘high prestige’ forms in more formal situations (such as school) and ‘vernacular’ alternatives in less formal contexts (at home, for example). In groups, however, several researchers suggest that speech patterns tend to converge when speakers want to show a degree of social solidarity. This is why the relationship between linguistic, personal and group identity are exceptionally close.

In this fluid context, Scottish speech is notoriously hard to pin down as it functions sometimes as a full language and sometimes as a ‘dialect’. The Scots Language Centre website rightly notes “Scots use a mixture of Scots and English in their speech, with some using mostly Scots and others mostly English. In this sense the language exists as part of a continuum with Scottish Standard English”. Jones (2002:5) suggests “the linguistic manifestations of Scots should be seen as a type of scale or cline, encompassing a very broad range of usage and formal characteristics“. Britain’s leading dialectologist Peter Trudgill (1983:112) recognises the uniqueness of the Scots vernacular; “Native speakers of Lowland Scots dialects may switch, in relatively formal situations, to standard English (spoken with a Scots accent of course). It is legitimate to regard this situation as rather different from that of an English speaker who simply switches styles.” Aitken (1979:86) makes a similar point; “Some [Scots] speakers can switch cleanly from one to the other—these people have been called dialect-switchers. Others again cannot or do not chose to control their styles in this way, but they do shift styles in a less predictable and more fluctuating way—these people we may call style-drifters.”

Conflict however does not stem from linguistic complexity but from perceptions of prestige. Purves (2002) puts this forcibly; “At school, a policy of cultural repression became the norm and generations of children were presented with an image of ‘correct’ or ‘good’ English but little or no attempt was made to present an image of good Scots. Commonly, the natural speech of Scots children was simply represented as a deviation of good English”. Thus we have what sociolinguists describe as a form of diglossia where English is associated with formal contexts such as education and in these settings “Scots will be equated with illiteracy, inarticulacy, low intelligence, or other negative qualities” (Wilson 2002:9). He goes further; “People who normally express themselves in Scots will often, if able, go over to English when talking to strangers, because not to do so might be seen as uncouth or ignorant”.

Linguistic ‘prestige’ is of course a social construction which can be unpacked further. The primary component is class; Scots is generally associated with working class and rural speakers. This has a profound effect in education where teachers are often from middle-class non-Scots backgrounds. However Scots is also, not surprisingly, associated with a Scottish identity.  Across the English-speaking world, using any non-standard language or variety is generally regarded as an act of defiance or a political stand (Abley, 2005). This seems to trouble Scottish politicians of both the left and the right. As sociolinguist Suzanne Romaine (2000:224) puts it “a fear of divided loyalties and identities – supposedly the result of unassimilated ethnic groups – has underlain the foundation of most nation-states”. The Scottish establishment seems to fear the emergence of what the Catalan sociologist Manuel Castells (cited in Chimisso, 2003:60) described as a ‘resistance’ identity. A resistance identity is where previously-marginalised groups, perhaps Scots speakers, legitimise themselves, often by excluding members of the dominant group (in this case linguistically). He contrasted this with legitimising identity, identification with state and established civil society (in this case the English-speaking establishment) and project identity where groups attempt to change structures of society or the roles of participants in it. The Scots language movement probably fits most neatly in the last group, but there is definitely some aspect of resistance to linguistic uniformity. Political theorist Chris Brown (2005) recognises the important psychological function of this type of identity “assuring us that we are not simply the product of global branding, but can control our own destinies by asserting ourselves as Christians, Scots, Sikhs or whatever” (p195).  It could also be argued that Scots language activists simply want the language to become established (‘normalised’ is the interesting term used by Catalans).