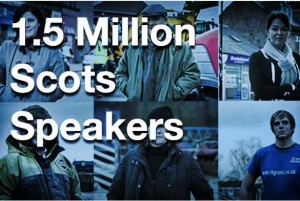 “Responding to figures released today by the National Records of Scotland which show 1.54 million people speak Scots Michael Hance, Director of the Scots Language Centre, said, “These figures are great news but after centuries of neglect it is time for action to be taken to safeguard the language for the future. The data gathered during the 2011 census gives us for the first time ever information about the number of people who speak Scots, where they live and which demographic groups they fall into. This means that we can begin to plan how to support communities of Scots speakers and to encourage those communities to value their language and pass it on to future generations.’

‘Scotland without the Scots language would be a pale imitation of itself. For centuries the Scots language has been at the heart of our culture, it has helped define us as people and has been one of the key media through which we have expressed ourselves artistically and creatively.’

‘The Scots Language Centre is calling on the government to draw up a Charter for Scots outlining how we can support the language and its dialects better.’

‘Children are the key to the future health of the language and we’d like to see new efforts being made to encourage innovative projects aimed at creating a sense of pride and self-worth amongst Scots speaking school pupils. Sadly we still hear about far too many examples of Scots pronunciation and Scots grammatical forms being ‘corrected’ by schoolteachers and this must stop. Children can easily understand the difference between language forms and have the capacity to learn both Scots and English. The days of attempting to stamp out language difference are over and we must ensure that Scots speakers are treated with respect as custodians of a centuries old language and culture.’

‘We need to see TV programmes aimed at youngsters which echo their own linguistic realities. Oor Wullie and the Broons are Scotland’s favourite comic strips but isn’t it about time we heard them speak.’

‘After many hundreds of years of neglect and active suppression of Scots it is remarkable that so many people can still claim to speak the language. That such suppression included the physical punishment of generations of school children will forever be to Scotland’s shame. We can now do something about righting these wrongs and I hope the Scottish Government will soon begin that process by announcing what measures it intends to take in response to these striking census figures.’

www.ayecan.com – information on Scots language question in the 2011 census.