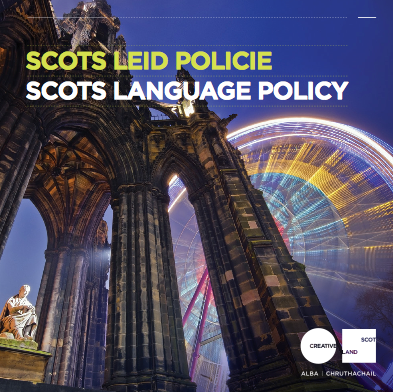 A key element of the policy is the creation of the role of Scots Scriever. This is a joint initiative between Creative Scotland and the National Library of Scotland and is a two-year residency to “produce original creative work in Scots, its variants and dialects, across any art-form”, as well as raising awareness, appreciation and use of Scots.

Other parts of the strategy are to develop a Scots awareness and training programme for CS staff and for organisations that they support and partner with across the culture sector. They also plan to to increase the use of Scots in their communications, promotions and events and on their website and social media.

This could maybe be construed as a dry run for a wider Scottish Government policy similar to the 2011 Gaelic Plan.

All of this seems hopeful and positive until you read the awful Scots version which has been very poorly written. I critique this guddle in another post.

Nonetheless a step forward, as identified in the Bella Caledonia post below. A wee scrieve oan Scots leid policyBy David Officer, artist and writer based in Stonehaven, Aberdeenshire The launch of Creative Scotland’s Scots language policy today is long overdue and sorely needed. I’m sure there’ll be many who view such a policy with suspicion and disdain; no doubt we’ll hear such choice phrases such as “Scots is a dialect, not a language”, “Why are we promoting teuchter rubbish?”, “only neds speak like that” or the classic “no one speaks like that anymore”.