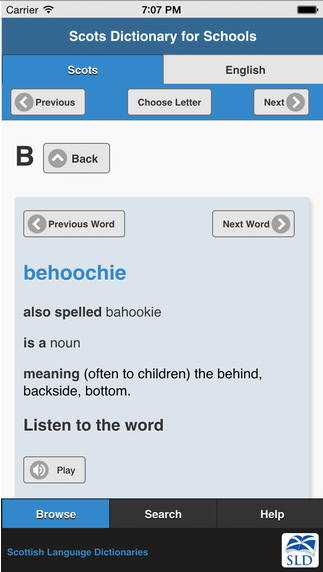 Available from your App and Play stores, a free English-Scots and Scots-English dictionary from Scottish Language Dictionaries. You can use it to browse or search for words in Scots or English and many words feature audio clips so you can listen to their pronunciation. Assistance on spelling, pronunciation and a brief history of Scots are given in the Help screen. A ‘random word’ feature is included that allows you to dip into the resource. The App is a useful reference for anyone requiring information on Scots. If you’ve ever wanted to know what words like ‘gallus’, ‘braw’ and ‘swither’ mean, or what the Scots words are for terms such as ‘rain’, ‘soak’ and ‘warm’ you can find the answers here.

The Scottish Government’s policy, Language Learning in Scotland: A 1+2 Approach, is aimed at ensuring that every child has the opportunity to learn modern languages from P1 onwards. The app was produced to support pupils who are studying Scots as a modern language or studying for the new SQA Awards in Scots Language.