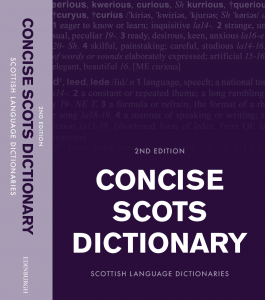 The Concise Scots Dictionary (second edition) came out in October 2017, updated from the first edition in 1985. It is the single most authoritative volume on the history, pronunciation and geographical distribution of Scots words.

Drawing on the 22 definitive volumes of the Dictionary of the Older Scottish Tongue (covering the period to 1700) and the Scottish National Dictionary (1700 onwards), with new words gathered from our national reading programme, the Concise Scots Dictionary offers an accessible, one-volume dictionary for all readers and writers.

The second edition has been revised and updated throughout to reflect modern Scots usage, alongside coverage of older Scots. It contains:

According to the blurb it contains:

Compared to the first edition, it now includes: