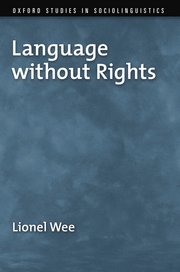 Discrimination occurs when “language and other cultural practices are suppressed by a dominant group intent on eliminating any marker of distinctiveness in both public and private domains, perhaps via a process of forced assimilation” (p48).

Wee introduces the notion of tolerance-orientated rights (right to use the language in homes) versus promotion orientated rights (active support for the use of their language in the public sphere). The latter is needed if all groups in a linguistically plural society are to enjoy equal protection and respect for their cultural identities, otherwise in comparison with members of the dominant majority, attempts by linguistic minorities to both participate and maintain their cultural identity are hampered.

There seems to be a link here to what are referred to as noninstrumental and instrumental language rights (p40) The former is concerned with protecting ones’ choice over community, culture and identity, the latter is the use of language in communication for example in the state’s preservation of social services and education. Remembering the unavoidability of language “needless to say the realistic existence of a culturally bleached public arena untainted by issues of culture is highly questionable” (p42).

Wee describes various schools of thought as to why languages should be preserved. One is focused on linguistic diversity. In Nettle and Romaine’s Vanishing voices  (2000) it is recognised that “the fates of languages are bound up with those of its speakers”. Pressure can be social, cultural, economic so “every time a language stops performing a particular function, it will lose ground to another that takes its place. Death occurs when one language replaces another over its entire functional range, and parents no longer transmit the language to their children” (p6-7) However Wee claims this approach  it may be detrimental to speakers if they are valued only as a means for language preservation. Linguistic communities may actually be quite happy to engage in language shift if they think it is economically or socially worthwhile. Therefore preservation or revitalisation programmes “should probably only be initiated if it in fact the expressed desire of the relevant community of speakers” (p53). On the other hand in my view, doing nothing is also a political act, especially if there is political, social or economic coercion of the speaker community is to change. Wee seems dismissive of  both the notion that parents should be informed of the pedagogical potential of bilingual education before choosing dominant-tongue-monolingual schooling and providing no choice in the first place is coercive..

Wee then raises the issue of ‘essentialising discourses’ again, and focuses on Jaffe’s  2007 example of Corsican (p55) . 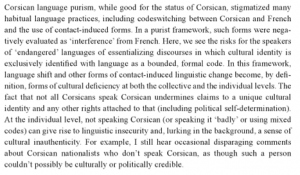 Most of the book is about rights of course, and several interesting arguments are made. Languages are “communally shared goods that are essential to a person’s sense of self”, so there is a case that language may be a ‘collective ‘ right, difficult to implement and controversial though that may be (i.e. balancing individual and collective rights).  Drawing on Fishman’s 1999 Reversing language shift he recognises “This is because, as a form of social practice, the maintenance of a language and its continued vitality cannot depend on its use by just one individual. Instead it requires that a group of individuals persist in using the language as part of their interactions and ideally across generations as well” (p60).

What are the aims of language rights anyway? Wee draws on Stephen May’s Language rights: Moving the debate forward (2005). May is skeptical about the “historical inevitability” of change, regarding it simply as a cultural arbitrary, a historical chance that has favoured one variety. He intends the minority language to gain sufficient prestige and value to satisfy the identity (noninstrumental) and instrumental or participatory needs of the speakers. Of course there is the option to accommodate both the dominant and minority languages in some form of bilingualism. For this to work though “it is critical to cultivate a strong awareness of the nature language and its possibly changing impacts on social relations, and open up public forums where these matters can be discussed in a spirit of mutual respect”(p70). However, as he correctly observes earlier “unfortunately the often hard-fought and adversarial conditions under which rights are gained tend not to encourage this form of reciprocal engagement” (p29).

I may return to Wee later to discuss Scots vis-a-vis Singlish and the ideology of standardisation.