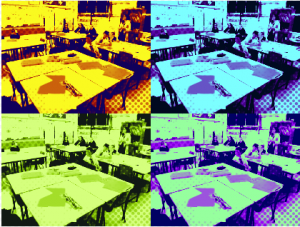 Language and power are closely related; as Christina Chimisso (2003:41) recognises “all cultural identities have to be learned, performed and reproduced”. Heller (1999 p18) sees schools as “important sites of social and cultural reproduction” (p 18) controlled by the state and state agendas and so “as a result, they have often been sites of struggle over state versus local control; for linguistic minorities”.

Chimisso (2003:55) refers to the sociologist and educational researcher Pierre Bourdieu who “had no doubts: the culture and values of school education are those of the dominant class” and so “education mirrors and reproduces existing social structures”. Romaine (2000:205) agrees “as one of society’s main socialising instruments, the school plays a powerful role in exerting control over its pupils. It endorses mainstream and largely middle-class values and language”. The consequence is that “children who do not come to school with the kind of cultural and linguistic background supported in schools are likely to experience conflict”. Linguistic ‘conflict’ of this nature can be internalised and so hidden.

The debate about the Scots language is just the visible tip of a much deeper semi- hidden discourse about the nature of Scottish identity. As Romaine succinctly observes “…the division between standard and non-standard is symbolic of other very deep fault lines in society. Debates about language are thus really about issues of race, gender, class, or culture, and about whose norms will prevail” (2000:224).

Bateman (2006:11) notes the success of the Gaelic Language (Scotland) Act which in 2005 recognised Gaelic as one of the official languages of Scotland “with parity of esteem with English”. Gaelic with about 60,000 speakers, compared with an estimated 1.6 million Scots speakers, has for many years been comparatively well funded and represented in education and the media. The Scottish Government is however still only tentatively considering the status of Scots despite various reports over the past decade making encouraging (and occasionally urgent) recommendations for Scots language planning and funding. Bateman concurs this is essentially a political debate; “endorsement of Scots…has always been easier to achieve in literary terms than in official or legal terms” (p 14), and cites the continuing health of Burns celebrations and a fairly thriving Scots writing scene.

The result is that although Evans found in the 2009 audit of Scots language provision in education “much practice happening on the ground” (p 20), particularly in primary education, such activity was fragmented and “uptake is dependent on local prioritisation of Scots language teaching” and so is difficult to quantify. Scots language had been highlighted within the Scottish Government’s 3-18 “Curriculum for Excellence” as part of the experiences and outcomes for Literacy and English. There is an emphasis on Scotland’s literature and the languages of Scotland but uptake was optional. Thus there was “no apparent consistency regarding educational provision across local authorities from a top-down perspective” (p 20) although he reported “strong interest and growing practice in most of them”. A curious aspect to this is that much work in terms of teachers’ workshops and the publishing of Scots materials suitable for primary school children has come from a commercial publisher Itchy Coo rather from official sources.

Some of the work done is outstanding however; one example from the  Learning and Teaching Scotland website “a primary school in West Lothian is currently exploring ways of introducing Scots throughout the year on a graded scale from P1 up to P7. Kirkhill PS in Broxburn has been working since January with Matthew Fitt, Schools Officer for Itchy Coo, to develop teaching materials and strategies appropriate to the different stages of primary. Head Teacher Anne Moir believes that a more structured approach to Scots among the school community will be of significant benefit to the linguistic development of her pupils.” It concludes “the EU-funded organisation Mercator Education based in Leeuwarden in the Netherlands is keen to see how this particular Scots Language programme develops. It has been suggested that Kirkhill PS may become eligible at a future date to join Mercator’s prestigious European Network of Bilingual Schools”, placing Scots in the wider European context.

I attended a Scots Language Conference at the University of Stirling a few years ago after the 2009 audit was published, and the work then being done with Scots in many individual primary schools was inspiring and moving. Nevertheless it was evident there was little coherence in the provision and the ambivalence towards Scots was captured in a quote from Eleanor Coner, the then ‘Information Officer’ of the Scottish Parent Teacher Council. She said: “We should embrace native (sic) languages, if you like, but the most important thing in primary is to learn to read and write and I don’t think we can force much more into the curriculum” (Cornwell 2009).

To conclude it hard not to concur with Eilidh Bateman’s belief that  “without the appropriate backing and funding the required level of language planning and promotion needed to significantly raise the profile of Scots is impossible” (Bateman 2006:21).