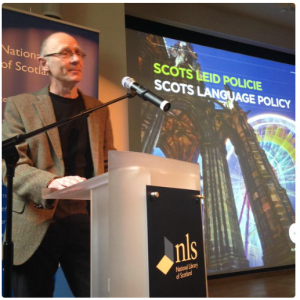 James Robertson’s speech from the Creative Scotland Scots Language Policy  launch event back in June. Perfectly reasonable Scots – so why was the policy in that dreadful DIY orthography?

That’s an expression aften fund in prentit sources o auld sangs and novels, and it’s uised by Robert Fergusson (1750-1774) in his poem ‘The Election’:

‘Rejoice, ye burghers ane and a’,

If ye gang oot o this buildin and doon the High Street and Canongate, ye’ll come tae the Canongate Kirk, and there on the causey is a fine statue o Robert Fergusson by David Annand. It’s a brilliant piece o public art. If ye staun and watch for ten minutes, ye’ll see aw kinds o folk – local bodies and tourists fae aw ower the warld – stoppin tae hae a crack wi Rob Fergusson, or gettin their photies taen wi him. He’s richt there in the hert o Auld Reikie – new Auld Reikie. And it seems tae me that if ye engage wi Fergusson’s statue, that micht lead ye tae spier, ‘Wha wis this man?’ And syne ye’d be obleeged tae engage wi the Scots language, for Fergusson through his poems is a tour guide tae 18th century Enlightenment Embra, and he tells us aboot this city, his hame, in a Scots that is as warm, reekin and rich as Robert Burns’s haggis. And o coorse Fergusson leads us strecht tae Burns, or Burns leads us back tae Fergusson, his greatest influence, and further back tae Allan Ramsay and the Makars, and forwart again tae Robert Garioch and Hugh MacDiarmid and the 20th century Renaissance, the plays o Robert McLellan, the poetry o Liz Lochhead and Kathleen Jamie and the fiction o Irvine Welsh and Anne Donovan – and afore we ken it we are engagin wi the haill o oor literature in Scots, past and present, and wi Scottish literature mair generally – aw because o yin piece o public art.

‘Lang looked for’s come at last!’ I welcome this, Creative Scotland’s official policy on Scots. It has been a lang time comin. I think it’s fair tae say it isna a fully-fledged burd as yet. It sits alangside Creative Scotland’s Gaelic policy, and it has some growin tae dae tae match thon. But when those o us that hae been engaged in Scots language activism for years luik at whit oor Gaelic freens hae achieved, we shouldna feel envious or disappointit: we should feel energised and ambitious. This policy for Scots is a statement o intent: aye, it’s aboot past and present, but even mair it’s a promise tae the future.

Much has been achieved already, but an awfie lot mair remains tae be done. By settin oot its stall wi this policy, Creative Scotland is sayin that it recognises Scots, it values Scots, and it is committit tae pittin actions ahint its braw wurds. And though I stertit wi Fergusson and literature, this isna jist aboot literature. It’s aboot film, and theatre, and visual arts, and classical, jazz and folk music, and dance; it’s aboot Scotland’s traditional arts, oor huge song and storytellin repertoire, oor oral culture. This policy says that the Scots language maitters and that it has a legitimate and valuable role tae play in aw oor lives, and that Creative Scotland means tae support and develop that role.

Scotland is in an unusual position when it comes tae languages. On the ae haun the warld kens us as an English-speakin country, and there are uncoontable economic and ither advantages tae be gained fae that perception. On the tither haun we hae these twa indigenous languages that are unique identifiers o oor place and oor people. If Scots and Gaelic are spoken elsewhaur in the warld that is ainly because they are spoken here. They are precious resources and baith could be seen as endangered: that maks them even mair precious, and it maks us responsible for protectin and nurturin them. Oor Government, and politicians in general, need tae think o Scots as a cultural asset, and Creative Scotland’s policy maks clear that that is exactly whit it is. But Scots is, first and foremaist, no a cultural asset but a language, and it belongs tae the folk that speak it.

Scotland is a country in which increasin nummers o folk speak ither languages. Let’s no forget that Gaelic and Scots were yince immigrant tongues tae. Last year a Scots-Polish Lexicon wis published: it’s a trilingual guide tae Scotland (English is in there tae) and the reason its editor, Kasia Michalska, compiled it is because thoosans o her fellow-Poles were comin tae Scotland tae bide and wark, believin that this wis a mainly English-speakin country. They were therefore dumfoonert tae find their neebors speakin aboot hame and hooses and oxters and ingans and gaun the messages and giein it laldie and haudin their wheesht. This tells us somethin else, in case ye didna ken it: Scots is vibrant and alive and in uise every day. As the 2011 census revealed, mair than 1.6 million o us say we speak Scots. For aw kinds o reasons that figure mey weel be a case o under-reportin, and we need tae find oot mair aboot whit folk mean when they uise the term ‘Scots’, or hoo else they describe their speech. But even that figure represents a third o the population. Language is integral tae onybody’s sense o identity. If folk are identifyin themsels as Scots speakers, nae cultural body – nae government either – can afford tae ignore them.

The official attitude tae Scots is chyngin. Education Scotland and the Scottish Qualifications Agency hae recently become engaged wi Scots in a wey that wid hae been unthinkable even ten year syne. There is a discussion ongaun jist noo aboot levels o literacy in oor schuils. Some micht seek tae say that bringin Scots intae the classroom isna helpfu in this regard. But literacy isna aboot competence in readin and writin English: literacy is aboot competence in readin and writin. Aw the experience o folk like masel gaun intae schuils and warkin wi bairns and their teachers suggests that exposure tae Scots in an educational context increases and improves wider language and literacy skills. If ye can help a pupil tae think aboot why some folk say hame, and ithers home, or why they themsels uise thae wurds in different social contexts, and if they also learn tae connect different soonds wi different spellins on the page, ye’re openin their heids tae the potential o aw language. Scots in the classroom can also hae a dramatic, positive impact on some reluctant readers, and on some alienated pupils that believe education isna for the likes o them, fae the day they enter schuil until the day they walk oot o it.

Organisations in the literature sector, like the Scottish Book Trust and Poetry Library, and the National Library itsel, hae been forwart-thinkin and proactive aroond Scots for some years. I hope that ither cultural bodies – the BBC, the National Museums and Galleries, Scottish Opera, orchestras, universities, arts and book festivals and the like – will tak their cue fae Creative Scotland and really stert tae engage wi the possibilities o Scots. Thae possibilities are limitless. Tae quote Hugh MacDiarmid,

‘For we hae faith in Scotland’s hidden pooers.

The present’s theirs, but a’ the past and future’s oors.’