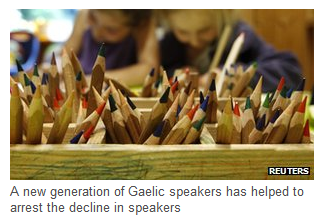 The Census data was released yesterday on the European Day o Languages, and we found out that Scots has many more speakers than Welsh, Icelandic, Breton, Basque, Estonian, Corsican, Sardinian, Frisian. Michael Hance captured the euphoria “an affa emotional day for me the day. Canna believe it’s raelly happent.”

However the this positive feeling was not to last. The deliberate cleansing of the Scots data from the NRS News release meant that one of the most important cultural stories of modern Scottish history, was completely missed by the Scottish and UK press and TV.

As Colin Wilson put it “Reporting Scotland the nicht hid a nae bad piece aboot the figures for Gaelic, even a cuttie interview wi an activist, bit said naething avaw aboot Scots, nae even that the figures hid been gaither’t for the first time.”

The only BBC News story Census shows decline in Gaelic speakers ‘slowed’ exemplifies the low-key media approach. Although there is a quote from Michael Hance, later the piece focuses on Gaelic (about 60% of the text). An excerpt follows to show the balance.

“A decline in the overall number of Gaelic speakers in Scotland has “slowed”, according to the latest results from the 2011 Census. The previous Census results recorded an 11% drop in speakers, while the new figures suggest a 1.2% fall from 59,000 to 58,000. The latest results also show a 0.1% increase in Gaelic speakers aged under 20. The Scottish government said the results were encouraging. The results also include detail on what languages are used in Scottish homes. They suggest that 93% of people aged three and over reported that they used only English at home. About 1.5 million people reported that they regularly spoke Scots. The figures also show 1% of the population – 54,000 people – used Polish at home, while 13,000 people reported using British Sign Language. Alasdair Allan, minister for Scotland’s languages, said: “While the census shows a slight fall overall, we can take real encouragement from the growth in Gaelic speakers under the age of 20“.

The really ‘important’ news story was about Gaelic, the ‘only English’ data (which will be discussed elsewhere) was used as a spoiler for the Scots data and Polish and Sign Language were given equal status to Scots. This is how a story is killed .

The British press showed no interest, only the Guardian story Where in Scotland do people feel the most Scottish? covered the Census at all, and focused on the (admittedly interesting) identity question. The BBC picked this aspect up too, Census suggests most Scots ‘feel only Scottish‘.

Not surprisingly there was no international interest. Even the normally reliable Eurolang NGO followed the NRS line. This was their version; “Decline in numbers of Gaelic speakers has slowed with the census showing a 1.2% drop from 59,000 speakers to 58.000 speakers, far better than the 11% drop ten years ago. The Scottish Government says the figures are encouraging and may show that Gaelic could be about to turn the corner and gradually increase the number of speakers. Comments from all the Gaelic experts here welcome. It certainly looks like the revitalisation effort is beginning to pay off. Mixed messages about Scots though. (my emphasis)”

Michael Hance summed up the treatment of Scots in despair “Aye weel, that wis Scots speakers cleansed fae the telly the streen an near on naethin on the radio bar a report on Radio Shetland. I did get a e-mail tho fae a quine I’m workin wi on anither project. In it she tellt me she’d heard on the news – dinna ken whit station – that jist 1% o fowk spoke Scots. That’s the vairsion that wis gien in the NRS’s ain unscientific an linguistically ignorant interpretation o the data. It means, for example, that o the 8000 fowk in Shetland that said they spoke Scots, jist 80 o them speak the language in the hoose. Sorry, NRS, but that’s keech an we’re nae pittin up wi it“.