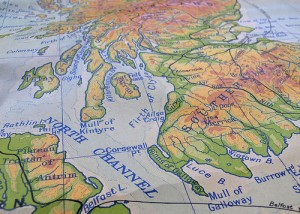 The Scots Haunbuik aims to provide teaching and learning resources to help you speak and write modern Scots.  Scots is a close realtion to English and used in Lowland Scotland, Ulster, Orkney and the Shetland Islands by an estimated 1.6 million people.

Scots is one of the three indigenous tongues of Scotland. Gaelic is a Celtic language spoken by about 80,000 people in the Western Highlands and Islands and Scottish English, spoken by nearly all of Scotland’s 5.1 million inhabitants, is the dominant medium of communication, education and commerce.

Over the last fifteen years, as interest in and recognition of Scots has grown, there has been a rapid growth of resources on the web and elsewhere. So far however there has been little to help native Scots brush up their own knowledge of this astonishing but little-understood language.

The site will focus on three aspects – speaking Scots, writing Scots and teaching/learning Scots. The aim is therefore educational rather than political but sadly even the modest aim of teaching our fascinating and fun language is sometimes seen as a provocative and political act.

If Scots is to survive in any form, people must learn about it and above all learn to use it. A language variety which is not used on a daily basis is effectively dead, even though it may have attractions as an esoteric hobby. Over the next few weeks three volumes of learners’ materials will be released, The Scots Learners’ Grammar, The Scots Learners’ Dictionary and a guide to Scots idioms.

Those who have read this far will notice that The Scots Handbuik has not so far answered the implied query Is Scots really a language? To some extent this is a non-question. Scots, however we chose to label it and whatever we think of it, is of significant importance historically, linguistically and culturally. It is the closest living relation to English and is the carrier of a key part of Scottish identity. In this sense the Scottish ‘soundscape’ is as essential as the Scottish urban and rural landscape.

Scots says much about who the Scots people are and where we came from. But where are we heading? Scots, in its eventual repression or renaissance, will tell us about that, too.