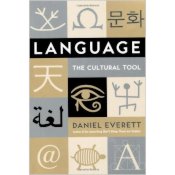 Daniel Everett’s “Language: the cultural tool” is  an entertaining and convincing riposte both to Noam Chomsky’s notion of ‘universal grammar’ which has dominated linguistics for decades and Steven Pinker’s populist ‘language instinct’. Both these theories claim the capacity and underlying language structure is somehow genetically ‘programmed in’ to the human brain, and that the difference between for example Scots and Somali are so superficial to be hardly worth studying. Above all, Chomsky and Pinker argue that culture is of minimal importance to the structure of languages.

Everett refutes this almost completely, basing his case on his own decades-long fieldwork with the Pirahã people of the Amazon and the emerging evidence from a wide range of other researchers that culture is vitally important to language formation.  Everett argues that language is a tool, highly adapted to a particular culture and well capable of having evolved from non-language cognitive skills. There was simply never any need to evolve a ‘language instinct’ and it is the actually the culturally-contextualised differences between languages, not their underlying similarities (which may be due more to basic cognitive processes than genetics anyway) that help us understand how human language works.

The ‘language as a tool’ notion seems an especially useful way to think about Scots. Everett’s often sprawling book is studded with quotes applicable to our language. Scots has evolved “to meet the needs of our culture and social situation” (p. 3), the very tool “by which we created our social world” (p. 218). But as we use language we “modify it and shape it to serve us more effectively. Language has been shaped in its very foundation by our socio-cultural needs” (p. 218). As a “cognitive tool” for its speakers any language “comes to encode their solutions to the environmental and other problems they face as a culture” (p. 302).

Language and culture are forever intertwined.  Everett views culture as the “external cognitive link between multiple individuals (p. 169). Language is essential to the development of culture as it “results from networked knowledge and behaviour with others and brings meaning from the world” (p. 169). Language is therefore both “a product and a producer of culture” (p. 169) and therefore “there can be no culture without language, no language without culture, and no society without both (p.187) for the simple reason that “culture is present throughout our conversations and stories” (p. 198).

Language is made up of an (arbitrary) set of linguistic symbols or signs “socio-cultural contracts entered into by all members of a speech community…these contracts are underwritten by culture, which provides people with external, shared memory” (p.120). The term contract is perhaps misleading in its formality and Everett later quotes the Scottish philosopher David Hume; “languages are gradually establish’d by human conventions without any explicit promise” (p. 205). Everett adds ” we must ‘go along’ with this language contract, assenting to language conventions by our use of them, or we are doomed to be language-less” (p.207). These signs are therefore “cultural tools” which we need – as Scots – to “tell stories and to communicate about a past event, without having to recreate it every time we talk about it” (p.120). We make use of culturally-contextualised non-literal meanings all the time in Scots, cultural keyword and shortcuts which are hard to translate into English.

Culture is about communities  and having a sense of “social belonging” (p. 237), “having a language to learn, one that others have developed for us” (p. 35). “The function of language  is not for the expression of thought but for the social purpose of communication” (p.225) and the idea of an identified language “community” is important. “We do not communicate solely to transmit information but to produce an effect –a behaviour  or a way of thinking – in our hearers” (p.223) so “we need to make sure that the people we want to talk to use the same symbols as we do, and use them in more or less the same way” (p.170), this may be especially in a Scots/English complex where the similarities between the two tongues mean misinterpretation is easy.

I particularly like the following passage (p.170)  which sums up the ‘distributed’ nature of Scots, and indeed of any language.

Each individual possesses a larger or smaller subset of the entire society’s value and knowledge depending on that individual’s experience and intelligence. These internalized values an knowledge then serve as tools to help the individual know what to do, what to expect, how to react, and so on. to the various dangers, pleasures, and other experiences of life without having to develop an entirely original response to each stimulus. These tools enable us to spend less time worrying about how we should live and spend more time living and doing.

Everett also touches on another sensitive area for Scots activists; “once a language is written down it almost always develops two styles, one written and one spoken” (p.142). “Few, if any, writers speak as they write (p. 200); we can make our sentences longer and more complex and use richer vocabulary simply because the reader has more time to interpret them. However “its influence extends into the spoken language as well (p.276). The result is “many languages have been changed by new literature, from idiomatic expressions to their very grammar (p.200).

The ‘tool’ theory implies languages “fit their cultural niches and take on the properties required of them in their environments … some languages are better than others at expressing some things, and … some are capable of expressing things that others simply cannot” (p. 234). Even though languages are adapted to what they do, unfortunately “language seems to come out particularly badly in [the] smorgasbord of uninformed opinions. Everyone seems to have a view about language: who speaks it correctly, which languages are superior and so on (p. 232). Everett reminds us “judgements of the [linguistic] inferiority of other groups have no scientific basis. They are, rather, the reflex of bigoted judgements about the speakers of these varieties” (p.230).

Everett’s approach implies Scots should be considered one of our most important cultural creations, indeed our most complex behaviour, a vehicle for sharing our history, values and ideas. The current form of Scots has been “determined by function” (p.27) but the very survival of that form ratifies its continuing value to Scottish culture. Even quite light use of the language;  cultural-specific pronunciations and, the occasional use of Scots words  can still be “a sign of cultural belonging”, and can take on a “secondary cultural value” (p. 316) of huge importance to the speaker.

As we know, “the loss of language brings loss of identity and sense of community” (p. 305). The reason is its effect on culture ” a living thing that bears the accretions of generations of lives, of our suffering, triumph, defeat of thousands of says of boring routine and the past interactions of people long dead” (p. 323). Therefore he concludes with an example: “The French possess a repository that dwarfs the Louvre – their own beautiful language and the culture that grew alongside and nourishes it (p. 326). The same could  also be said of Scots – perhaps our greatest cultural treasure