Doric (North East Scots) is to be taught as a 15-credit undergraduate course at Aberdeen University. The module is designed to introduce students to Doric/North-East Scots and develops oral and written skills, explores North-East culture through song and story, and places Doric in the wider context of the Scots language, and other related European traditions.

The Open University in Scotland and Education Scotland has launched Scots language and culture. The 10 part course is aimed at  at “a broad audience ranging from Scots speakers, to people who want to find out about and learn some Scots, as well as teachers and other educators”. Two years in the making, it highlights the role of the language in the culture and society of the past and present. Learners will   will develop an understanding of:

the use and recognition of Scots in Scotland past and present

the history and linguistic development of Scots

the links of Scots with other European languages

the use of Scots in different literary genres and other art forms.

The first of its two parts is now available free on the OU’s OpenLearn Create platform, with the second set to go live by the end of the year. Dr Michael Dempster, Scots Scriever at the National Library of Scotland, called the course “a significant step forward in the continued recognition and understanding of our language”. 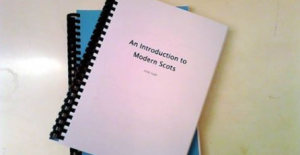 You can now download a ‘An Introduction to Modern Scots’, a PDF version of Andy Eagle’s  ‘Wir Ain Leed‘ that contains additional material in A4 format so as to be be printed and read as a book.