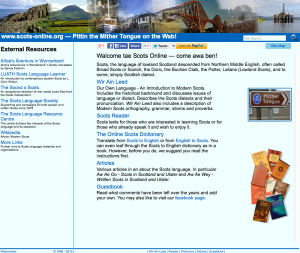 Every year for the past several years, I’ve had my students in my undergraduate linguistic anthropology course do an exercise.  I give them the following text, without any explanation, and ask them to get into small groups and to translate it into English (without searching for it online):

The student response usually starts with bafflement, followed by a tentative effort to take on a few obvious words like ‘eddication’, followed by some speculation that it is perhaps Old or Middle English.   I then give them a perplexing hint: ‘This text was written within your lifetimes’, and then give them two more minutes to work on it before we discuss it.

The text above is in Scots, and is taken from the Wir Ain Leed site promoting the Scots language.  As you’ll see (if you haven’t already worked it out), it’s a perfectly ordinary copyright notice.   Once the students realize that this is a genre of text with which they are familiar, there’s a sort of a-ha moment.  Once somebody identifies it as Scots (which really, shouldn’t be so hard since the word ‘Scots’ appears in the text), I read it out loud in its entirety in my not-too-bad but certainly-not-perfect Groundskeeper-Willie-esque Scots.  Once the language and the genre have been established, the rest of the translation, which we do collaboratively as a whole class, moves along well.

The point of the exercise is first of all, to get the students to reflect on what constitutes English (or any language) by prodding at its boundaries.  With Scots, there are still some scholars who would insist that this is ‘Scots English’ – i.e., a dialect of English, albeit a fairly divergent one. Others (I think most, these days) define it as one of two languages descended from Middle English, the other being English, of course, and separate out Scots proper (the language) from various Scottish English registers.

It’s a handy little exercise.   It lets me talk about ‘A language is a dialect with an army and a navy‘, and then to compare and contrast the Scots case with Yiddish. It lets me introduce (and complicate) the question of mutual intelligibility (with reference to cases like Serbian/Croatian); most students are (sensibly) reluctant to define what they just read as English on the grounds that they couldn’t understand it.  It lets me introduce the distinction between ‘a Scottish accent’ and the broader range of features that constitute  dialects or languages, and to link this to our text (McWhorter’s The Power of Babel).

Like I wrote earlier, I do this every year.  Just by chance, ‘Aw richts is pitten by’ was on the schedule for yesterday’s class, just as the Scottish independence referendum looms large in the minds of many.  Even American college students, who are stereotypically characterized as having no awareness of anything else in the world, may have heard John Oliver’s hilarious rant on the subject.  To talk about this issue, just at this decisive political moment, brought an additional level of analysis into play.

I don’t have a horse in this race, which actually surprises me a bit, since I lived for a decade in Quebec as an ethnolinguistic minority amidst an environment of secession fever.  But then, of course, most Scots don’t speak Scots regularly, if at all, and the debate there isn’t about linguistic nationalism to any significant degree.  Regardless of how it all turns out, it cast a poignant light on a favoured classroom moment, at a critical juncture in the history of two nations.