Last year I completed a Masters course at the Open University with a module on ‘discourse analysis‘, a subject that sounds formidably intellectual but actually is remarkably practical and hugely relevant to any study of Scots and linguistic nationalism. ‘Discourse’ means the stories we tell each other as a community and in particular the stories the powerful elites tell us about ourselves through the media, education, and religion and so on, essentially to keep us all under control

In an earlier blog post I collected a range of anti-Scots articles going back 15 years or more. These represent the views of Scottish ‘elites’; writers, journalists, politicians and pundits who feel sufficiently uncomfortable by the advocacy of Scots to attack it in print. It can be seen these elites rely on long-established practices – so-called ‘discourses of domination‘ to maintain their power.

Each of their points could be challenged line by line but what is far more interesting is to explore the socio-cultural context of these writers, the drivers and assumptions that motivate them. On the OU course I was particularly impressed by Critical Discourse Analysis (CDA), an academic approach developed among others by English sociolinguist Norman Faircough. One prominent CDA advocate, Dutch linguist Teun van Dijk, explains how CDA helps us to uncover “the strategies of manipulation, legitimation, the manufacture of consent and other discursive ways to influence the minds (and indirectly the actions) of people in the interests of the powerful“. It attempts to map out “the strategies of dominance and resistance in social relationships” and uncover hidden ‘ideologies’, according to Fairclough and colleagues “ways of representing and constructing society which reproduce unequal relations of power, relations of domination or exploitation“. Although as you might expect, CDA is often associated with a ‘western Marxist’ stance, it also works pretty well for a Scottish autonomist stance,

In future posts I’ll explore how CDA might work to unpack anti-Scots language arguments but it may be best illustrated for the moment by a non-linguistic example. 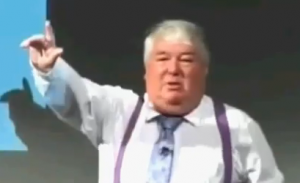 Scottish nationalists often express frustration by the way they see asymmetric political access to media, particularly the Scottish press and the BBC is used coercively by the London and Scottish unionist power elites to ‘manufacture consent’ (e.g as suggested by the infamous BBC anti-independence videos see right). This they argue is not simply the fair statement of an alternative political position, but an open abuse of power. The aim is to create and maintain a British ideology. Not exactly hidden, perhaps, but a key CDA insight might be that is British ‘nationalism’ – rarely self-labelled – becomes normative and naturalised to the point of invisibility and Scottish nationalism – invariably labelled as such –  is highlighted as the deviant  ‘other’ to be resisted.This would explain both the subtle and low-intensity ‘institutional unionism’ in so much of Scottish media and why open accusations of bias in, for example, the BBC are usually dismissed out of hand rather than investigated and corrected.

Back to linguistics, in exactly the same way the relentless drive to English-only monolinguism – again never described as such, but that is what it is – has become so normal and naturalised that any advocacy of Scots, no matter how modest, must therefore be deviant and strongly resisted. Gaelic advocacy on the other hand can be accommodated as Gaelic is now so weak it poses no threat to the elites whatsoever.

The problem for the most of us who are not professional politicians and journalists is that according to van Dijk we “lack the knowledge of rules and strategies of grammar or discourse, [we] may not have sufficient knowledge to detect lies and manipulation, or strong counter-opinions or counter-ideologies to argue against and reject influential text and talk“.

It seems to me if we want to argue for a healthy multilingualism in Scotland, where Scots, Gaelic and Scottish English are normalised and dynamic parts of our linguistic culture, tools such as critical discourse analysis might be useful approaches to begin to counter the powerful propaganda of the anti-Scots establishment.