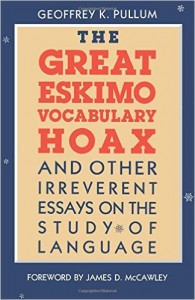 Eminent Scottish-born linguist Geoffrey K. Pullum, now Professor of General Linguistics at the University of Edinburgh, was so sceptical of the claim that the Inuit have 50 words for snow, he described it as a hoax and even named his 1991 book of essays (right) to underline the point.

The hoax (or just myth) is persistent though, and although many cultures have rich vocabularies for familiar contexts, Scots seems “abune them aw” with respect to our winter weather conditions.

“Academics compiling the first Historical Thesaurus of Scots, which will include every word in the Scots language from earliest records until today, claim they have found 421 Scots words for snow. Other examples include “snaw” and “sneesl”, meaning to begin to rain or snow, and “skelf”, a large snowflake”.

But is it true? Could Scottish culture (too small etc etc) make this unique claim?  Cue skeptical voices, but given the peculiarities of Scotland weather it certainly sounds a plausible new meme.