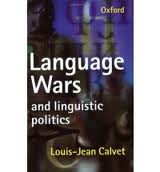 The third part of a discussion based on a reading of French linguist Louis-Jean Calvet’s Language Wars.

Calvet identifies three ways in which a language can ‘disappear’; though transformation (e.g.different dialects themselves become languages (think of Irish and Scottish Gaelic), extinction, when the last native speakers die (think of Manx and Cornish) and replacement where after a period of bilingualism, the dominant language is the only one commonly used (the now non-Gaelic speaking parts of the Highlands and Islands). If the two languages are sufficiently close (as with English and Scots) replacement can occur by a gradual process of absorption “a subordinate language slowly blends into the dominant language” (p 104). In Scotland Standard English is slowly digesting Scots, and even Scottish English.

Calvert suggests you can trace the process. If you consider a language made up of its distinctive grammar (syntax in linguistic terms), vocabulary (lexis), and pronunciation (phonology), the absorption starts with the grammar, then progresses though lexis to phonology. Although the grammar of pure Scots is still quite distinct, the grammar of English has and continues to make substantive inroads, especially in speech. The ‘Scots’ you often hear may in fact only be individual Scots words connected by fairly standard English syntax. Over the years, as it is not taught, the lexis itself begins to shrink and eventually the only trace of the absorbed language is the phonology (in our case Scottish accents). What happens is that “certain phonological contrasts in a language tend to disappear, to be replaced by a haphazard alternation (or ‘fluctuation’) a fact which is evidence of the destruction from within of the whole system” (p.109).

But surely a whole accent cannot be lost? Consider the case of Cornish where in a 2012 article there are fears that the accent is actually disappearing and research in 2005 warned in Scotland even some very distinctive pronunciations such as the rolled ‘r’ and ‘ch’ may be under threat and could be lost “in a generation“.

Before anyone thinks such changes are ‘natural’, Calvert warns again “the death of a language always has non-linguistic causes (power-relations and so on)” (p 109). So in Cornwall the accent loss is attributed to two factors; “Cornwall has been increasingly populated by people from up country over the past 20 years, so it’s not really surprising the accent is now in decline” and the huge influence of lingustically standardised TV a major likely cause of death.

As a aside, TV is clearly a huge linguistic influence but we only occasionally consider its influence on the speech especially of the young. The decisions on language use are hardly ‘open’. Here is an example. According to one ex-writer of the popular Glasgow-based soap River City there was a deliberate and all-too-believable BBC editorial decision to write the scripts not in the authentic Glasgow Scots of the setting, but in near-standard English. Maybe the argument for this was ‘accessibilty’ and the potential of marketing the show outside Scotland, fair enough, but the effect of linguistic ‘cleansing’, when TV is often seen as a linguistic role model for the young cannot be underestimated. Such decisions always have consequences, unintended or otherwise. River City has been broadcasting a deliberately sanitised version of Scottish speech for half a generation. The role of TV, and Scottish TV in particular, in the strange ‘disappearance’ of Scots from the airwaves will no doubt be the subject of a future post.